If you are wondering how did Pragtech come up with a logo looking like a bunch of circles and a dot in the middle. Well, let me explain to you how a then-candidate and now a lead software engineer had the idea of the company’s logo.

Alvin Rapada who was applying for a software engineer position in Pragtech back in 2015 was tasked to create a brand new logo for the company. It was his assignment prior to landing the job he has now three years ago.

Alvin knew that Pragtechnologies is rooted from the word “pragmatic” which means practical, sensible, reasonable, down-to-earth and honestly, I can go on with other terms synonymous to being pragmatic but, Alvin understood that being practical, reasonable and down-to-earth also entails being focused on the work being done. He then thought of the lens of a camera.

Camera lenses have the ability to focus on a subject thus, getting sharp photos. That being said, Alvin pictured that Pragtech, with it being practical, is also focused on getting quality results. Like eyes on the prize, he added a dot in the middle to show how the company is concentrated on achieving its goals and business targets. 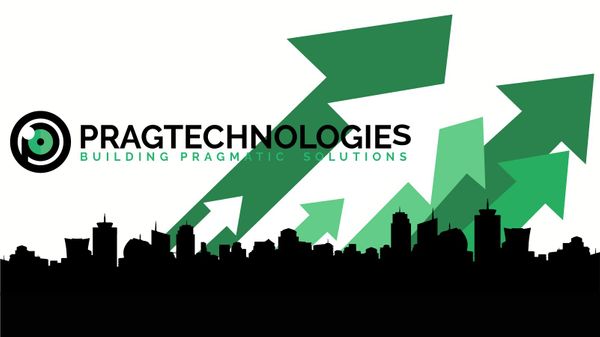 Marikina City is known as the Shoe Capital of the Philippines because it is where most of the country's expert and skilled shoemakers, artisans and manufacturers are found. But a tech startup, Pragtechnologies

It's that time of the year again. Pragtechnologies celebrated its Christmas party, Friday, December 7, ahead of the month-long celebration of fun and festive activities in the country. Noel del Castillo, CEO of

Elixir and React Software Development Company in the Philippines - Pragtechnologies
—
Where Did That Come From? Pragtech’s Logo Explained
Share this