Marikina City is known as the Shoe Capital of the Philippines because it is where most of the country's expert and skilled shoemakers, artisans and manufacturers are found. But a tech startup, Pragtechnologies, is slowly carving in its own domain in Marikina where the country's first pair of shoes was made in 1887.

Established only in 2014, Pragtechnologies is a thriving enterprise with a growing list of clients here and abroad despite the difficulties the company faced during its first few years. In a competitive tech industry, Pragtech is slowly becoming a name to reckon with, thanks to the hard work and dedication of Noel del Castillo, who founded the company together with his wife, Vanessa, more than four years ago.

The etymology of the company name, Pragtechnologies, is an interesting one, reflecting Noel's passion for the tech industry and his desire to create something that would reflect that passion.

“I had the name Pragtechnologies for years. I bought the domain name way back 2009. I’ve been using it as my personal blog,” Noel, 35, said when asked where did he get the name of his company.

He was an avid reader of a website called The Pragmatic Bookshelf where he learned a lot about different skills and technologies. This is where he got the concept of pragmatic programming thus, he created “Pragtechnologies” which means pragmatic technologies.

“Pragmatic technologies” basically means being able to build a quality technology in a straightforward manner.

Noel and Vanessa are both Master’s Degree graduates of University of the Philippines. Noel took up Master in Technology Management (MTM) while Vanessa obtained a degree in Master in Business Administration (MBA). After graduation, they decided to put up their own company that would make use of their combined skills: Noel in technology and Vanessa on accounting and the financial side of the business.

“After I finished my master’s degree, I realized that I wanted to have my own company that’s related to the industry I pursued ever since,” Noel said.

My Brother, My Client

While Noel and Vanessa have already decided to establish their own company – backed up by a roadmap and a plan, they still have not figured out how to actually do it until Noel's brother, Rommel, came into the picture.

“Kuya Rommel asked me if I have my own company already. When I said not yet, he advised me to start incorporating it as a company so he can just give the project to me,” Noel said.

Aside from becoming his first client, Rommel also became their first investor to the company that's also all in the family. Together with Rommel and his two representatives, their father Ernesto (who handles legalities in building a business) and the couple founded Pragtechnologies.

Noel took his chance on the project his brother offered and through partnerships with companies like Xero they were able to integrate an accounting system for Rommel's business.

“At the first year of operations, Pragtech was focused on doing system integration services,” Noel said. Noel singlehandedly worked on the system integration, although he had an employee, Pragtech's very first, who was a working student.

That was how the business started, though the next projects took time because Noel was then figuring out how to make the business work properly.

“Getting clients and bringing revenue to the company was really the biggest challenge. Our solution was to mitigate the cost. We will only incur cost when there is revenue. That was our logic,” Noel said.

The young CEO took small time projects to build Pragtech’s portfolio. He knew he had to change the direction of his company to software development. To do that, he needed clients who were willing to partner with the company and pay for the services to develop software.

As he worked on his company’s portfolio, he became active in other startup projects he co-founded. He brought foreign clients and was able to deliver projects. Through this, Noel was able to gain clients for his own tech startup.

Pragtech’s first office was in Eastwood in Quezon City in 2015. From there, Noel started to hire four employees to help him with Pragtech’s first major project that was set for four to six months. Hiring additional employees was necessary if the fledgling company will meet the requirements of its clients on time and deliver quality services.

“On the second year, we fought on really delivering the expectations of our clients. We already have clients so the next challenge was to ensure they are happy with our services and to deliver our projects on time,” Noel said.

For him, being able to meet the client’s needs on time and keeping them was a test to know if his company will succeed. It gave him confidence after his clients kept on coming due to the quality of his work and the delivery on the agreed time. These clients were also providing him with good feedback.

In 2016, Noel and Vanessa decided to leave Eastwood and relocate operations in their three-storey home in Marikina, where Pragtech is based until now.

The tech entrepreneur considered the cost of renting an office space and the traffic going to Eastwood and coming back to Marikina, where he and his wife live. Since most of his employees were also residing in Marikina, he thought it was not practical to maintain an office elsewhere. Another consideration was privacy: the setup in Eastwood was co-working and it meant sharing an office space with other companies. It was hard to establish a distinct culture for his company if it continued sharing an office with others.

As Pragtech grew, it created a family-oriented culture where relationships are valued. Noel is satisfied to see that his employees are enjoying their work in a homely environment.

The Will to Win

Looking back, Noel who finished a Computer Engineering course in college, had simple dreams. He only thought of landing an IT job, have a decent paycheck, save enough money for his family and become an entrepreneur.

Today, Noel has been going to places like Singapore and as far as Finland to showcase his products and services. He also made his company known by attending hackathons here and abroad and by doing so, secured a number of projects and international partnerships. Pragtech has also grown to 26 employees from only four at when it was first housed in Eastwood.

“All it takes is the will to win,” Noel said, capsulizing the principle that he lived by day after day.

One of his aims is for Pragtech to be known as an incubator, building companies and inspiring other local software development firms and startups, especially those that are also based in Marikina.

“There are already a lot of IT companies in Makati and Ortigas. My goal is to inspire people in Marikina because, why not? Our city has so much potential although we are not as industrialized as the two other cities,” Noel said.

Noel believes that Marikina City can become an IT hub. All it takes is having the right people with the right tech skill set, access to the internet, a burning passion and ambition. And everything else can be worked on.

“I want to see Pragtech as a well-established and respected global company that paved the way for others, especially those that are also from Marikina,” Noel said, beaming with pride and optimism, as he ended the interview. 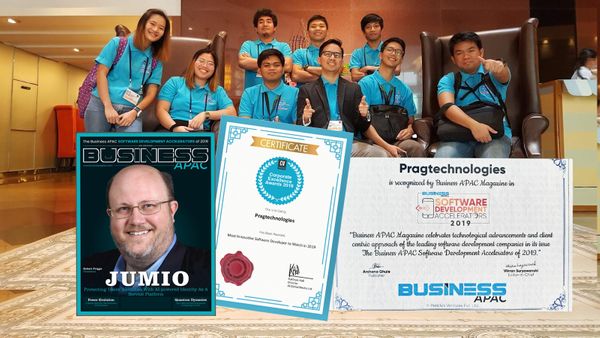 Pragtechnologies Corp. (Pragtech), a start-up tech company headquartered in the Shoe Capital of the Philippines, which specializes in software development using the latest technologies in the market, was considered as one of the

If you are wondering how did Pragtech come up with a logo looking like a bunch of circles and a dot in the middle. Well, let me explain to you how a then-candidate