It's that time of the year again. Pragtechnologies celebrated its Christmas party, Friday, December 7, ahead of the month-long celebration of fun and festive activities in the country.

Noel del Castillo, CEO of Pragtechnologies threw a party back in time to celebrate the company’s Christmas party this year at View Point Villa Resort in Antipolo.

Pragtech occupied the whole villa and enjoyed the facilities including a large swimming pool and karaoke where they sang with their hearts’ desire.

Everyone was game to strut their stuff and showcase colorful outfits to channel the 60s, 70s and 80s era. A trip down memory lane was this year's Christmas party theme.

With a gratified stomach and little chitchat, the party went on with the group presentation. Each group consists of seven to eight people, graced the dance floor and entertained everyone in the hall.

It started off with a good vibe performance from the 60s group mostly male with Jamie Floirendo as the only rose among the thorns. They grooved and did the twist craze from the early sixties. Each of them also did some freestyle dance moves. They took the third place and won P2,000.

Meanwhile, the audience and the judges had their eyes glued as the 70s group, led by the power couple Loisy Salvacion and Alvin Rapada occupied the dance floor with their interpretation of clubbing in the 70s with a dance showdown. They didn't forget to add a punch of humor at the end of their performance. They won first place with a cash prize of P5,000.

Last to perform was the 80s group. Everyone fell in love with their fierce, cute, diva-like dance moves. Jethro Riosa and Errol Nicolas released their inner sassiness as they choreograph to Madonna’s Material Girl. They all looked good in their matching blue jeans outfit. The group won second place and took home P3,000.

After the dance performances, everyone walked like a ramp model and introduced themselves one by one. Some were a bit shy while some were like, “You only live once.”

The fun carried on as special awards were given to notable employees who did a remarkable job. And some of the awards were probably given to expose those who have been a little bit mischievous throughout the year.

A game was prepared that night that made everyone laughed out loud.

Roniel Maramot went head to head with Hermil Gil in a game where players have to finish eating a marshmallow tied to a string that was being controlled by their toes. Roniel finished the game in a jiffy.

Of course, the party didn’t end without announcing who won the King and Queen of the Night - a title for the best-themed dress. A sash and a cash prize of P2,000 each were given to the winners.

Hermil, who fashioned himself with a floral polo shirt, striped pants, black leather shoes, cowboy hat, and a gold bling won the King of the Night. Not to mention he also cartwheeled his way to the final runway.

Loisy, on the other hand, came ultra-prepared and worn a bright pink wig with a headband, pink pleated silk dress wrapped with a black belt, net stockings, and white sandals. With that outfit ensemble, the title was indeed hers to keep.

Exchanging of gifts followed and company Christmas giveaways were handed by the Pragtech’s little CEO’s Shaun and Nash del Castillo.

Before the program ends, Noel gave a speech to his Pragtech family sharing his heartfelt gratitude to the company’s success this year and how the team is growing in numbers. He also mentioned how thrilled he was that everyone was game and enjoyed the party.

If you are wondering how did Pragtech come up with a logo looking like a bunch of circles and a dot in the middle. Well, let me explain to you how a then-candidate 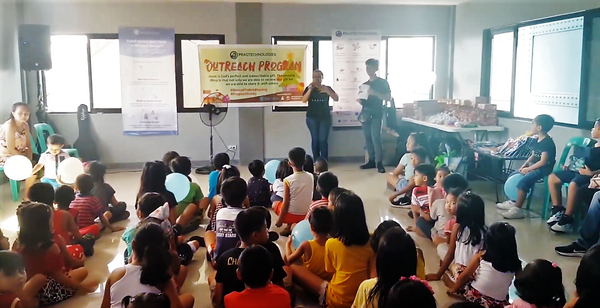