The Asian Development Bank (ADB) and the Asian Institute of Management (AIM) hosted another successful hackathon for startups in the Asia Pacific (APAC) region last September 2019.

More than 700 youth and startups from around the world presented innovative solutions to three challenges based on current organizational and development needs. The categories were: “Building the Digital Skills of Employees,” “Developing Digital Payment Solutions,” and “Future Proofing for the Water Crisis.”

Pragtechnologies Corp. also goes by the name Pragtech, entered the “Future Proofing for the Water Crisis” category with its app called Poseidon.

Headquartered in an area prone to flooding, team Pragtech led by its CEO, Noel del Castillo alongside three lead software engineers’ Rod Romarate, Rene Cris Sol, and Roniel Maramot, and UI/UX designer Bryan Vizcarra, had an idea to create an app that would enable residents and local officials in Marikina to monitor the flood situation during the rainy season. But more than that, Pragtech was looking at something that would also help resolve another crisis in the country — the intermittent water interruption.

Poseidon to The Rescue

According to the Greek mythology, Poseidon was the god of the sea (and of water generally). Poseidon is a violent, ill-tempered, and has created disputes among other gods and men. But, Pragtech changes the game for this Greek god.

Over the past years, flooding in the Metro took as many lives of our loved ones more than what we could ever imagine. Floods caused by mere low-pressure areas (LPA) that bring storms to super typhoons that enter the country in a year. On the other side, the shortage of water supply during El Niño or dry season causing an alarming drop in the water level of Manila’s major water source and hydro-electric power plant.

Since the first quarter of 2019, the country’s capital city was having a major setback with its water supply from its main source which is the Angat Dam in Bulacan.

As the water level continues to fall in the Angat Dam due to El Niño, residents from Metro Manila and nearby areas have a restricted supply of water.

This is when Noel del Castillo and the rest of the team came up with another solution that would inform the citizens about the rotational water service interruption and the availability of water supply in different areas.

Poseidon also aims to aid the government to perform rescue operations which include the evacuation of concerned residents as Poseidon alerts authorities and enables them to assess the situation and the affected areas when there is a rise in water level during the rainy season.

The Philippine government has yet to create a sustainable solution for today’s water crisis.

Having to experience both flooding and water shortage almost at the same time, Noel and his team built Poseidon to face these societal issues in line with future-proofing the country as a whole.

The solution behind Poseidon was an emerging technology in today’s generation called the Internet of Things (IoT). An IoT solution typically requires an ecosystem of partners that spans from sensors to applications.

Poseidon is composed of map layers that can sense as visually presented through heat maps which barangays have a low to zero supply of water during a crisis and which of these areas are at the threshold of evacuation during a typhoon. Poseidon was meant to be linked to the local government’s database.

Poseidon stores all the data gathered from various sources as residents can share the current water situation in their area using the app letting other residents prepare for a flood and locate in real-time where water is available. This initiative where anyone can contribute their water updates could mean an all-new and improved way of bayanihan in the Philippines.

The collected data is publicly available providing complete transparency and will be used for future purposes needed by specific regions and the government.

The Future of Poseidon

Noel and his team plan to integrate the API from various organizations like Agos of Rappler, National Disaster Risk Reduction Management Council (NDRRMC) and the Philippine Red Cross with Poseidon.

Poseidon will also involve Artificial Intelligence (AI) to its existing features to expand the user experience as part of its next phase.

Creating a solution to serious societal problems such as struggles in water shortage and flooding, Pragtech’s Poseidon is a dynamic tool focused on sustainability, empowering Filipinos through public involvement and demonstrating the power of today’s technology.

Poseidon's future is bright albeit not winning this year's hackathon. Marikina's local government sees it as a useful instrument they can work with to deliver advance and quality public service. 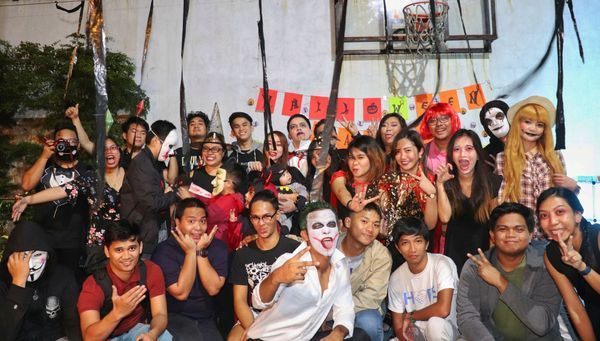 We have Joker and Dora the Explorer in the house y’all! It's the first time Pragtech [https://www.pragtechnologies.com/] celebrated a 'Spooktacular Halloween.' Celebrating Halloween was our way to release