Pragtechnologies, a tech startup established in Marikina City, brought honor to the Philippines after winning second place at the Turku Business Region Ultrahack held in Turku, Finland on October 12-14.

With a team of five representatives, the company crossed half the world to join the international event and compete and network with other participants coming from all over the globe. Pragtechnologies was the sole delegate from the Philippines.

“There were teams from India, and some Vietnamese participants mixed in with the teams from Finland, but we were the only ones from the Philippines,” said Noel del Castillo, the CEO/CTO of Pragtechnologies, as well as the Master Architect who personally led the team to the hackathon.

Noel was accompanied by four other members of the company, who lent their varied skills and expertise to the project. Rod Lauro Romarate and Dorothy Joy Suarez were the primary Fullstack/AI developers, Alvin Rapada was the UI/UX engineer as well as another Fullstack developer, while Eloisa Salvacion was the UI/UX designer for the web and mobile apps.

The team was young, but highly experienced. Already, they have engaged with various clients ranging from international enterprises to government agencies. They have also developed original products and services such as SeeYouDoc, an online medical appointment booking system, and the Marikina government website and mobile app.

Ultrahack is an organization based in Finland, operated jointly by Futuretournaments Oy, The Student Union of the Department of Computer Science in the University of Helsinki, and Digital Forum Finland.

Ultrahack regularly holds hackathons, open to participants from all over the world. Different teams gather to solve various industry problems and social challenges using innovative technological solutions. With input from peers and mentors, the teams develop their ideas and solutions over the course of just two to three days. The event culminates with the finalists presenting their pitches before a panel of tech experts and partner companies.

It was the company’s stellar performance in the Manila hackathon that caught the attention of Ultrahack CEO Mikko Järvilehto. He invited the team to try applying for the Turku Hackathon so that they could further test their skills.

Initially, Pragtech was reluctant to participate; they would incur hefty costs for the transportation of a full team of five members, after all, not to mention passports and visas that had to be taken care of within the brief timespan. Eventually, the company decided to seize the opportunity before them.

The prize at stake for this competition was €5,000. More importantly, it was a chance to network with key Finnish companies, and to show the world just what Pragtech was capable of.

The Journey to Turku

There were two challenges for the Turku Business Region Ultrahack. The first challenge was called Hack the Spread of Epidemics, and resolved to innovate handwashing practices and technologies to curb infections and diseases. This was done in partnership with KiiltoClean, a Finnish company focused on cleaning and hygiene solutions.

The second challenge was called Hack the Future of Cruise Ships. In partnership with Meyer Turku, a major European shipbuilding company, the primary task here was to reimagine and innovate the very concept of cruise ships to pave the way for futuristic developments.

Pragtech decided to participate in the second challenge. The team developed a bold new idea: an AI tour guide that could attend to the needs of the thousands of cruise passengers, all at once, 24/7.

Thus, TourBot was born. Within just a span of two weeks, the team went from mere concepts to a working prototype. They had managed to set up a functioning web portal and mobile application for the AI tour guide just in time for their trip to Finland.

During the hackathon proper in Turku, the Philippine delegation truly distinguished themselves with their professional work ethic, as well as their ability to swiftly implement ideas and suggestions into concrete output.

(“We were the only team that managed to demo our product. Majority presented only ideas, which weren’t deployed yet. They were also happy that we could implement their suggestions right away.”)

Team Pragtech was more than happy to continue learning and developing TourBot throughout the duration of the event, especially to incorporate the feedback they received. Their effort paid off as they became one of the chosen teams for the final round of pitching, and ultimately they won the second place. They shared the second place position with another project called True World Behind the Fantasy, led by a Finnish team.

Watch the video coverage of the event through this link.

“Natuwa talaga sila sa team, hindi sila makapaniwala na two weeks lang nagawa namin lahat,” Noel added. (“They were really impressed with the team, and they couldn’t believe that we did it all in just two weeks.”)

The team showed the world that Filipinos are more than capable of standing toe-to-toe in the highly competitive global arena. The event judges and mentors were impressed that the team was utilizing techniques and technologies that are just as advanced or even more advanced than the ones they themselves used.

Because of this positive exposure, the Pragtech CEO is very hopeful that this would open the doors for better relations and future collaborations between Filipino and Finnish companies. The team was approached by many other people after the event, and the organizers were eager to refer them to potential clients and partners. They saw that the future was indeed bright and held many possibilities for the growing tech industries of both countries.

“Ultrahack was very thankful for our participation,” Noel said. “They said that their events wouldn’t be successful without teams like us. In fact, another organization was already inviting us to a similar event, this time in Russia,” he added, with a laugh.

For those who are interested, Pragtech is now hiring. A number of positions are available, especially to those living in the Marikina area. It is open even to fresh graduates and those with little work experience, as long as they’re willing to be trained and open to learning. View the available positions over here. 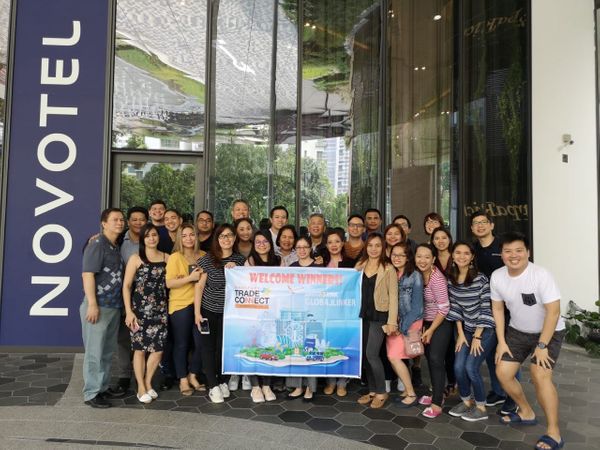 SeeYouDoc at the TradeConnect GlobalLinker in Singapore sponsored by UnionBank.